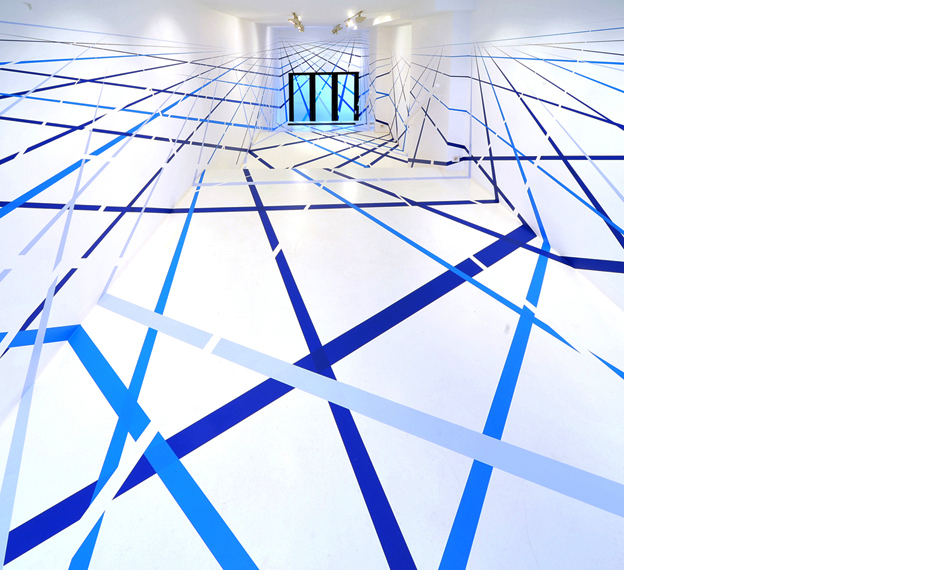 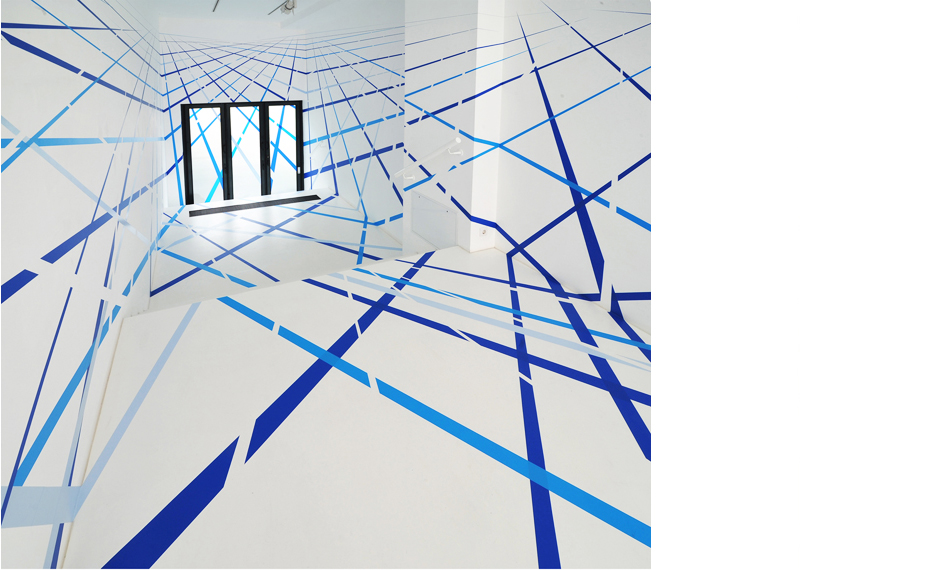 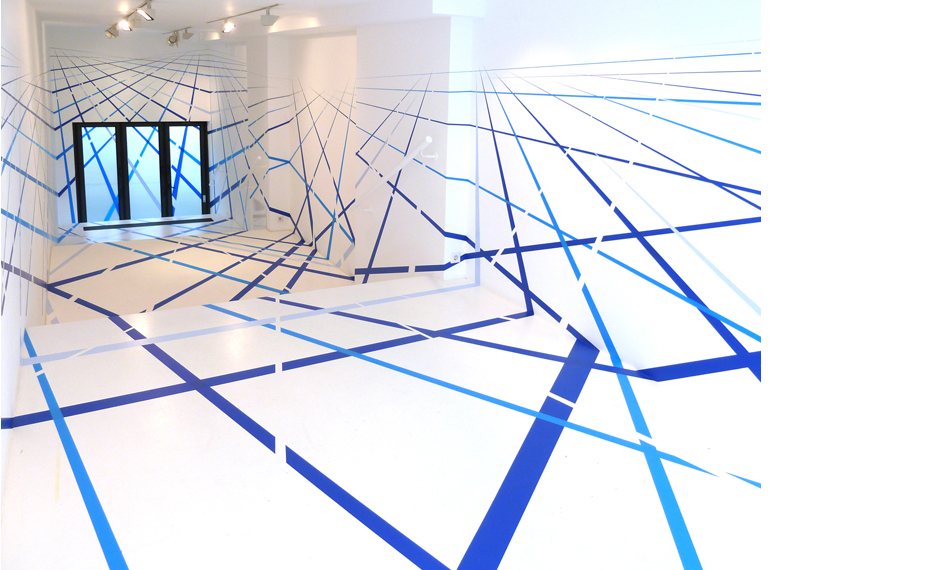 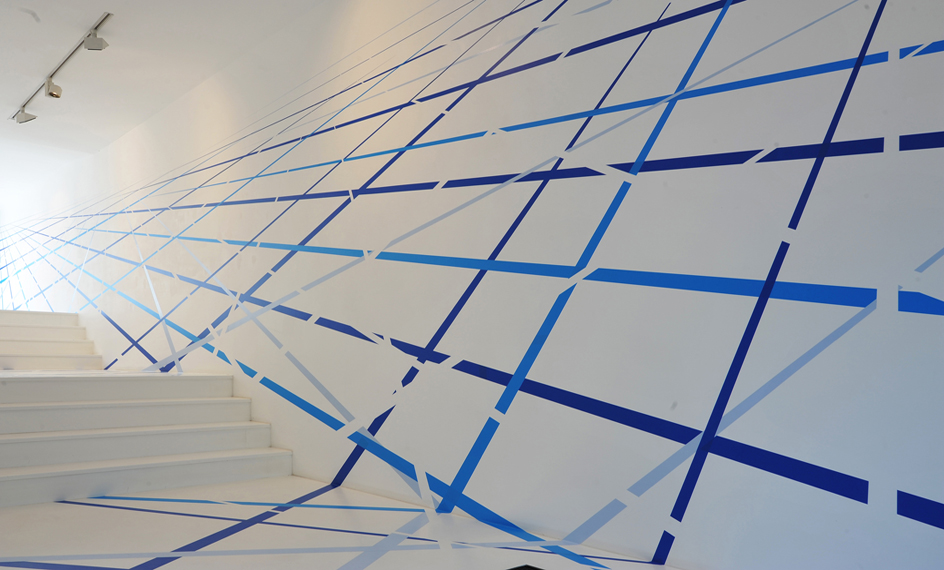 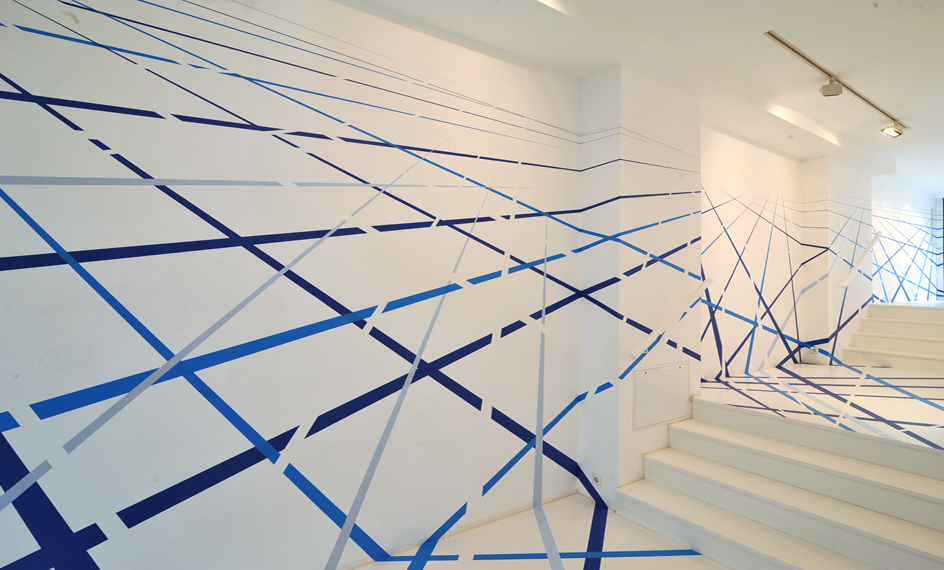 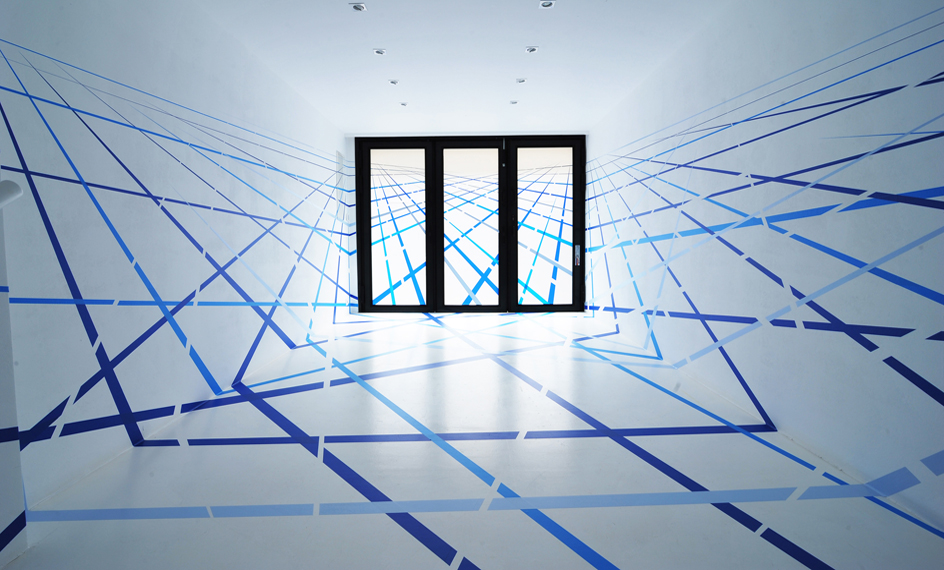 The term “layline” originally came from the sport of sailing and is an imaginary line in relation to the wind that determines the optimal angle of a yacht’s sail to reach the finishing line. In short, it is a fictive line that designates the optimal course. But as soon as the starting point for this measurement changes—in this case it would be the standpoint of the observer—the “layline” changes too. Accordingly, the artist has not only indicated the optimal course in the gallery—which by the way would have had to start from a fixed viewer standpoint—but, anticipating the viewer’s movement in the room, has depicted different “laylines” on the walls and floors that come together to produce a multi-perspective environment.

The installation is made up of foil material in graduated tones that go from dark- to medium- to light-blue. The blank spaces between the foil open up another perspective, which is perceived as white lines. However, the exact spatial site of the respective lines cannot be tracked precisely enough, for they are entangled. In this way they generate a flip-flop game between “above” and “below” as well as “front” and “back”. From any initial irritation, a new and more profound spatial experience is free to arise.

This installation was the first multi-colored, three-dimensional work by Achim Zeman. In it, and characteristic for the artist, every single line is precisely composed. All of which provides a closed system within an open one, since the “Laylines” network of paths eliminates the real space and expands it mentally to infinity. Achim Zeman himself understands his installations fabricated out of foil as “painting without a brush” that, by way of the material, has the advantage of the greatest color presence and formal precision; while at the same time pointing to their origin in panel painting. Against this background, Achim Zeman’s installations take on a new aspect. By declaring the room’s physical space as a three-dimensional picture support, he plans his installations as walk-in pictures that now allow the viewers, who themselves become part of the “three-dimensional” work, to physically experience painting. An experience that traditional easel painting had led them, over centuries, to demand, but was not able to fulfill because of spatial limitations and the two-dimensionality of the medium. Achim Zeman’s installations, on the other hand, allow this ancient dream of a walk-into quality of pictorial space to come true. Moreover, “Laylines” deals with a fundamental theme of painting, namely the perspectival line that, in the age of the Renaissance, introduced the illusion of space into painting for the first time. It is out of such perspectival lines that the artist constructs his three-dimensional color drawing.

The “laylines” are oriented in a linear perspective to the corners and niches of the projected space. In this way they offer the viewer the greatest possible scope and does so both in the real gallery interior, where they guide visitors through the entire room and, then called up by the imagination, also in the virtual space that opens into infinity.